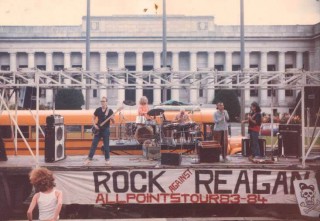 Playing on a flatbed truck in front of the State Capital – Olympia, WA – Oct. 1983

By May, the band is playing local gigs regularly and a buzz is starting to grow. At Will’s urging, they head to a local home recording studio (one of the first local digital tape recording facilities) to make a 4 song cassette EP – dedicated to John’s memory. In July, the band is invited to play the main-stage at the counter-cultural Oregon Country Fair – to a crowd of approx. 500 enthusiastic hippies, punkers and tripping freak-flag flyers.  At the then height of their newfound local popularity in Oregon, they make the mistake of deciding to move early to San Francisco, where they hope to become part of the nascent “World Beat” music movement/scene happening there.