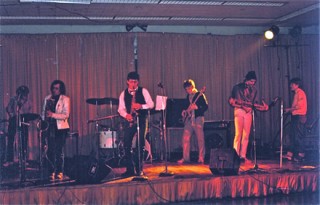 Stick Against Stone – Live at the Syria Mosque –
Pittsburgh, PA – 1982

Fascinated by African music, drummers Vitale and Sullivan would study West African drumming styles and patterns for a time under the Ghanaian ethnomusicologist Dr. Willie O. Anku, founder of the African Music and Dance Ensemble at the University of Pittsburgh. Applying co-operative ethos and interlocking rhythmic principles of West African drumming to contemporary popular music styles was an audacious goal, but one that the group found fertile compositional ground in. Inspired by the energy of punk, while steeped in diverse and eclectic influences (Murray – who also played tin whistle – came from a family of musicians rooted in Irish music and dance. Vitale, son of a jazz drummer and record store owner – had his playing was compared to a “tightly-coiled spring” and Creighton had a gift for words and a charismatic presence on stage, whether delivering his own lyrics, Beat-inspired poetry or playing saxophone or flute). Equal parts No Wave, Post-Punk, Dub and Avant Jazz – they are very far from the welcoming environs of downtown NYC. And while everyone can sing – it is obvious that Creighton has the strongest voice and most powerful stage presence.

Never a stranger to tension or personality conflicts, the band goes through a wrenching breakup – with the 2 horn players (Wenzel and Laugelli) and bass player Duer leaving, yet with Creighton staying on.  As the band had obtained a reputation for adventurous songs and performances, some of its fans in the area were other musicians who checked out their shows. After the departures, a few of these fans leapt at the chance to play with Vitale, Sullivan, Murray and Creighton – including guitarist Lyn Thomas (Freeman), keyboardist Anne Gallagher and bassist David Soule. Realizing they can’t perform the older, horn-rich material in the same way – they set to recruiting new members and writing new songs. In come the guitars and keyboards, but still from a perspective of playing simple repetitive patterns – not solos. Afrobeat, jazz and funk all blend with reggae, dub and rap to create powerful mélange. Songs are written quickly at their house on King Avenue – with the two drummer/percussionists developing groups of interlocking rhythms that are named after letters of the alphabet. From Song A to Song J – these new structures would serve to create the foundation of ten new songs – with 3 songs from the previous lineup surviving. These cassette recordings (the last they’ll ever do with John Creighton) from that fall & winter of ’82/’83 – reveal a new sound emerging that builds on the Stick Against Stone foundation and vibe, yet take it to powerfully resonant new places – with chronic migraine-headache sufferer Creighton channeling poetry he’d written in earlier years for some of his most powerful performances). As low-fi as these King Avenue recordings are, (they’ll eventually released at some point) they point the way toward what was to come.  Four of the songs from this era – including their opus “Get It All Out” – appear on the Stick Against Stone Orchestra album of the same name.

After one final show in Pittsburgh, the band decides to pack up and move East.