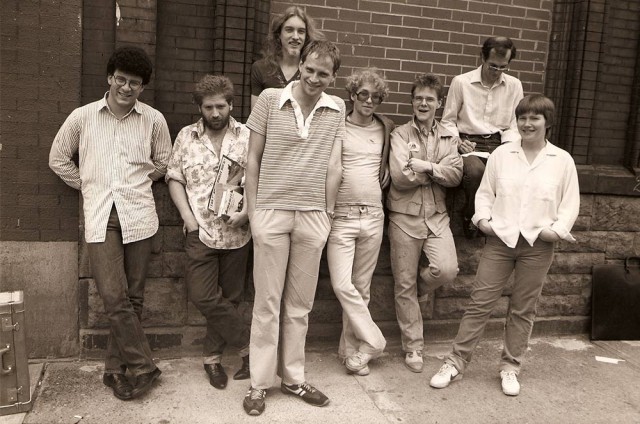 In 1981, a six-piece band/collective called Stick Against Stone started writing songs in a dirt-floor basement of a row house near the University of Pittsburgh. Like a musical cargo cult fed by the global eclecticism of their local freeform community radio station – WYEP-FM – this “horns and percussion” outfit acquired a taste for afrobeat, punk rock, art funk, free jazz and dub reggae. Beyond the moniker of “no wave” – they wrote surprisingly deep melodic hooks amid swirling, ambitious and funky arrangements.  Finding themselves with a devoted local following – but without a proper album to their name – it would be several years and cities later that they eventually broke up and their quirky, soulful songbook was lost to time.

Until now.  Stick Against Stone Orchestra’s new album “GET IT ALL OUT” (out January 22nd) shares the same name as a multi-platform documentary about the band and their music (due in 2014). Consisting of a powerhouse nucleus of both original members and an impressive cadre of new players – including keyboardist Joe McGinty and guitarist David Terhune from Loser’s Lounge, Paula Henderson on baritone sax (Burnt Sugar), Jesse Krakow on bass (Shudder to Think, Time of Orchids), percussionist Yusuke Yamamoto (Dizzy Ventilators, FELA! – The Musical) and session-ace drummer Denny McDermott – it’s a veritable cavalcade of talent, but amazingly, everyone sounds fully invested in the “power of the circle” that is the new Stick Against Stone Orchestra.